Do you use Logic Pro X? You need to know how to add plugins to logic pro x if you want to keep using it.

If you’ve spent any time producing music in Logic Pro X, you’ve no doubt come across instruments with plug-ins loaded into the Audio FX slots.

And, if you’re new to Logic Pro X, and/or to making music in a DAW, you’ve probably wondered what the hell they are, what they do, and how to add plugins in Logic Pro X to create an extra layer of sophistication to your tracks.

You will generally start adding plugins after you’ve completed the sampling stage.

What Exactly Is A Plugin?

A plugin is a tool that you can apply to a track to manipulate the sound of the audio. You will generally start to apply plugins before you go on to the autotuning stage.

Prior to the age of digital audio and music production, they didn’t exist at all.

In order to manipulate the sound using compression, delay, EQ or any other effect, you’d need to fire up a separate physical unit. Luckily, things are a lot easier in the world of DAWS like Logic, and a simple click of the mouse gives you access to a folder full of effects.

Some common types of plug-ins include: 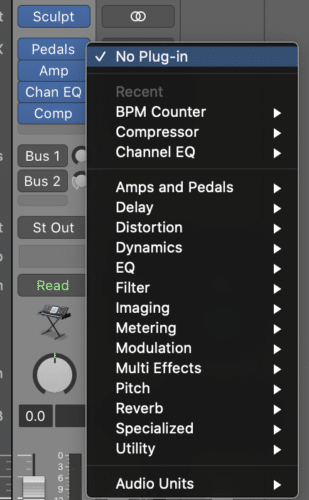 Logic Pro comes with a library of fantastic, professional quality and highly usable plug-ins, but you also have the option to purchase or download third party units that can be used within the DAW (more on that later).

Why You Should Be Using Plugins

It can be easy to forego the need to use plugins in Logic Pro, not least because the sounds generated by some of its stock instruments are amazing.

But, you run the risk your finished tracks sounding like everybody else’s. After all, they have access to the exact same instrument sets.

By simply experimenting with Logic’s built in plugins (the stock ones are great), you greatly expand the diversity and quality of your tracks, differentiate yourself from the thousands of other producers out there, and have more control over the final sound.

Adding a plugin to a track in Logic is ridiculously easy. Gone are the days of complex patch bays and external processing units!

On the track’s channel strip (either to the left of the edit window, or inside the mixer window), click on a blank slot under Audio FX. Choose a plugin from the drop down list. You’ll notice Logic’s stock plugins are organised by type (a folder for Delay, a folder for Modulation etc).

Any third party plugins are located under Audio Units at the bottom of the list. 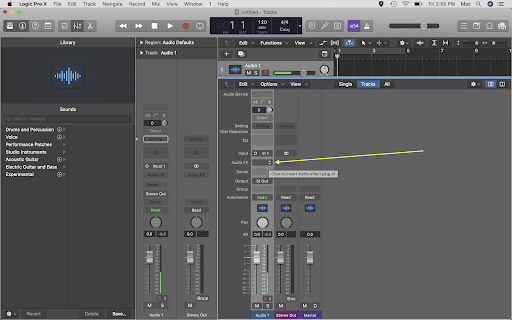 If you’re brand new to using plugins, a great place to start is Logic’s Channel EQ. It’s highly visual, intuitive, and is a perfect way to understand the way that plugins manipulate the sound of your tracks.

Where are Logic Pro X Plugins?

Logic’s stock plugins are built into the code of the software itself, so you will not be able to locate them on your Mac, or use them with any other software.

Third party plug-ins (Audio Units) however are stored in a folder on the Macintosh HD, and you can find them here:

How Do I Get Logic Pro To Recognize New Plugins?

If you’ve installed new third party plugins, Logic should recognize these automatically when you fire the software up. If Logic Pro is not showing your Audio Units plugin, try quitting the software and opening again, or restarting your Mac.

Still not working? Head to Logic Pro X>Preferences (make sure you have Show Advanced Tools ticked), and select the Plug-In Manager.

Depending on your version of Logic, this may also be called the Audio Units Manager, or AU Manager. Hit ‘Reset and Rescan Selection’ and let Logic do its business and scan the Macintosh HD. Your Audio Units file should be installed and recognised by Logic’s Plug-In Manager in no time. 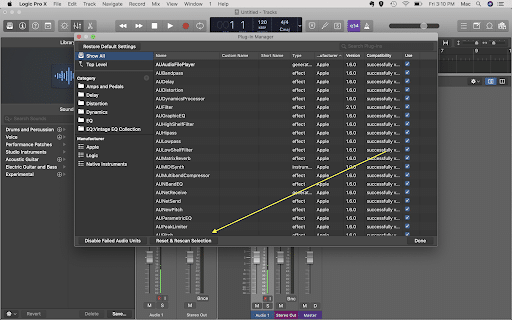 Can You Use VSTs In Logic Pro X?

The short answer is no. Apple uses the Audio Units (AU) file type for its third party plugins. There are, though, a few “VST wrappers”, which serve to turn VSTs into AUs for use in Logic.

This is kind of like converting a WAV file to an MP3.

To list a few that could be installed on your Mac:

So, now that you know how to add a stock Apple or third party plugin to Logic Pro X, it’s time to start levelling up your music production!

Logic has a huge library of great plugins, and there are a number of free ones available too, just search “free AU plugin” and get creating!